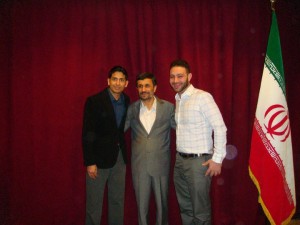 As each day passes, we see the threat of Islam in America growing more and more. From Islamic expansionism in downtown Manhattan, to Muslims suing the state of Oklahoma in favor of Islamic Law, to Muslim organizations in America teaching Muslims how to live by Islamic Law. Unfortunately even Muslim kids are spreading the hatred that stems from Islam, across our great country.

An Interview with Muslim Students for Justice

The following is an interview of Borna Danesh and Irfan Hussain, founders and of Muslims Students for Justice based out of Dallas , Texas . These two brothers are relatively young, but have the experience and dedication to Islam that people far older than them often don’t have. They have been the main driving force for Al Quds day programs and many other Islamic activities in their area for many years They are constantly engaged in other anti Zionist activities. They have been targeted by the F.B.I. for no other reason than the fact that they are justice seeking youth who refuse to be swayed by the MTV culture. They are an inspiration to us all because they live in the U.S. yet do not succumb to its materialism. They constantly fight for justice and are very brave.

Islam Times: Tell us about Muslim Students for Justice. What is it about? What is your mission statement?

In other words, they constantly fight for Islam. Which has a profound hatred Jews.

Islam Times: I heard you visited President Ahmadinejad in NY. How did that go?

Borna & Irfan: It was an honor to meet the President once again. Just like Imam Musa and Imam Asi, President Ahmadinejad is “keeping it real,” which I think is one of the best complements that I think could be given to anyone. Being the President of 70 million people has not changed him at all. He is the same person that he was before he became President that he is today, which was one of the advices that Imam Khomeni (ra) would give to the presidents when they would get inaugurated. When we met with the President at 10 at night he had been awake since 5 in the morning and had been in meetings all day, he was barely able to stand up, you could tell by looking into his eyes how tired he was, but he still took time to talk to us about our activities, and programs that we have had. Working from 5 in the morning to 12oclock at night is an everyday occurrence for the president.

These guys embracing Ahmadinejad an enemy of America, says alot.

Islam Times: Your group has been responsible for organizing Al Quds day protests in Dallas for the past 6 years or so. What are your thoughts on Jerusalem day and its importance?

Borna & Irfan: We have several programs and activities through out the year but
Quds Day is the most valuable because we are taking part in an annual
event that happens internationally. Many people may not understand the
importance of Quds Day, but Quds day is very important because it is the day that has been designated as one on which the oppressed people of all nationalities and creeds can come together and stand against oppression. This applies especially to the people of Palestine who are facing an oppressor (Zionism) that has its proverbial fingers in all the troubles spots around the world and is responsible for the majority of the fitna in the world.

Are the persecuted Coptic Christians of Egypt, invited to this event? Will they be allowed to openly protest against Islam?

Islam Times: what role do you think young people can play in the U.S. , especially Muslim youth?

Borna & Irfan: The most important role young people can play in America is counter
Zionist propaganda. Young Americans need to start understanding that
the Zionist problem is a global problem. It is the root cause of all
the murder and mayhem that goes on in the world. It is not a problem
that is only geographical in the Holy Land : Al-Quds, but rather a
problem that negatively affects the lives of people globally. Muslims
in America should help the poor people, because when we don’t help the
poor people than we are just helping the Zionists further their goals.

The only problem with your propaganda, is that the hatred of Jews that stems from Islam existed long before the modern state of Israel offically existed. Islam is the root cause of much of the murder and mayhem that goes on in the world.

Islam Times: you have been the subject of harassment by the .F.B.I. and other governmental agencies for no crime other than speaking your mind and
condemning Zionism and the U.S. government for its policies etc. what are you thoughts on the .F.B.I. and how it engages in such practices?

Borna & Irfan: The FBI is an entity that from its start has shown hostility
towards peace-loving people. What you see on TV is not entirely true.
Hollywood tries to create a positive image of the FBI by showing scenarios where the FBI is trying to catch a serial killer. We are not the only ones that have been singled out by the FBI. There are many individuals that get frightened when they get that first phone call from the FBI and then end up meeting up with them at Starbucks. We cannot stress enough how important it is for every peace-loving person
in America to know their rights because you are not obligated to
answer any questions especially when there is no real investigation.
If it makes you feel safer, get an attorney.

The Muslim victim card, is alive and well.

Islam Times: as a Muslim American youth, what is your message to the Muslims fo the world?

Borna & Irfan: My message to the Muslim youth is to see who the global enemies of the freedom loving people of the world are and that to make those the enemies of themselves.

So you want Muslims to oppose themselves?

Islam Times: is there anything else you want to add or say?

Borna & Irfan: Thank You for interviewing us it was our pleasure. One friendly advice that I would have for all Muslims is to participate in revolutionary activities, and to encourage local mosques to have revolutionary programs about Imam Khomeini (ra) Malcolm X, Che Guevara and other Revolutionary figures. I would also encourage mosques to invite Imam Musa (h.a.) and Imam Asi. (h.a.)

Once again we see Muslims having no concern whatsoever for the beliefs of non-Muslims. Our politicians would be doing the country a great favor by drilling for our own oil, and then ending all Muslim immigration. We have enough problems of our own, we don’t need Muslims coming here bringing more.

← Obama: Islam has Been “Distorted”
Islamic Center of Tacoma: Our Children Shall Follow the Example of Mohammad →

22 comments for “Dallas: Muslim Students Look to Unite Against Israel”