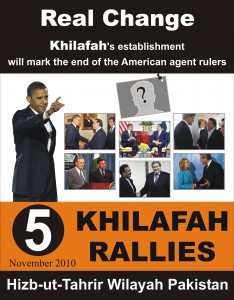 On November 5Th, Hizb ut-Tahrir (HT) will be holding rallies across Pakistan. Their goal is a world ruled by Sharia, and unfortunately Sharia is already taking hold in Pakistan.

(From April 2009)
President Asif Ali Zardari signed the Nizam-e-Adl Regulation into law today after a majority of the Pakistani Parliament passed the bill. The regulation allows for the establishment of sharia courts in the Malakand Division, an administrative region that encompasses more than one-third of the Northwest Frontier Province and includes the districts of Malakand, Swat, Shangla, Buner, Dir, Chitral, and Kohistan.

How long will it be until all of Pakistan falls to Sharia rule? Sharia and nukes do not mix…

Only Khilafah will bring real change because Khilafah is a system which is based upon the commands of Allah the All Mighty and this system does not abandon its people for the whims and desires of few individuals. That is why this system liberates man from the slavery man and liberates the humanity from oppression. Therefore in order to educate the masses of the real change, Hizb has announced that it will hold rallies across the country on 5th of November 2010. Through these rallies people will be informed that the ‘real change’ is only possible through the establishment of Khilafah. Khilafah will sever NATO supply-line within hours of its establishment. It will suffocate America by joining hands with the people of Tribal area and Baluchistan. Oil, gas, electricity power plants, gold, copper, coal and other minerals will be declared public property. Payment of money against interest based loans will be stopped. Unjust taxes like income tax, sales tax will be abolished and Islamic laws of revenue such as Khiraj, Usher, Zakat will be implemented and Khilafah will work day and night to bring in its fold all the Muslim countries and then it will emerge as the greatest power of the world.

Of course they do not mention the barbarity of Sharia, and how it discriminates against women, non-Muslims, apostates, and homosexuals.

Here are the comments that were left on the HT website.

may Allah opens between us and them in Right

Muslimah said:
May you be successful with the rallies, May the masses support you in your call towards real change. Ameen

ALL EYES ON PAKISTAN! The world is watching so closely. Hope, pray and wish that All goes well for Hizb Ut Tahrir’s efforts, the vision is so amazing that fills the heart with tranquility.

Hope Allah guides the Ummah to your call! Inshallah

Victory for the believers!

23 comments for “Pro-Sharia Rallies to Take Place Across Pakistan”