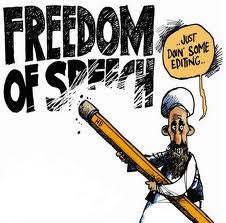 In attempt to scare off those who speak the truth about Islam, Muslims and their supporters continually toss out the term “Islamophobia”. The other day a Muslim posted a link to the plan on my site, and I am not exactly sure why he or she did it. Either way it is all layed on the website of the Council of Islamic Organizations of Greater Chicago. One of their goals is to try and equate the term “Islamophobia”, with a hate crime. There are numerous points in their plan that we need to counter.

There are obviously many lies in this list, but I will not bother to refute them all, we need the focus to stay on the actions we must take.

16 Ways You can Fight Cartoons & Islamophobia

1. Remember the Prophet. The Prophet was subject to horrible insults and hate crimes in his lifetime. He remained steadfast, patient and tolerant in the face of this Islamophobia. We must model this same behavior.

Good and Evil deeds are not alike. Requite evil with good, and he who is your enemy will become your dearest friend. But none will attain this save those who endure with fortitude and are greatly favored by God. (Quran 41: 34-35)

Pray that God guides these people who mock His messenger.

2. Keep sending Salam and Durood to the Prophet, which is the main way Muslim demonstrate our love for the Prophet.

3. Make protest more honorable since it is for the love of the Prophet. Perhaps a public recitation of the Quran either voiced or silent will be more powerful and worthy of the Prophet.

4. Do not engage in forms protest that are condemned in Islam. This includes burning flags or other symbols that people hold in esteem or insulting other religious groups. Unfortunately, some Iranian newspapers have commissioned the drawing of anti-Semitic cartoons in protest of the offensive Danish ones. This is a disgusting form of retaliation that deserves absolute condemnation. Not only does this contradict Islamic rules of respect for others, it will neither help fight Islamophobia, nor elicit any understanding about why Muslims are upset about the Danish cartoons.

5. Note that incidents of Islamophobia are not isolated. Whether it’s depicting the Prophet as a terrorist, disrespecting the Quran, torturing prisoners, bombing civilians or occupying Muslim lands, these are all signs of Islamophobia.

6. Also note that not all media or all non-Muslims support this type of insulting behavior. Many have been at the forefront of condemning torture, bombing and occupation.

Ask them what race Islam is, and let them know Jews were no threat back in the 40s, but there is a a worldwide Sharia movement happening. So the comparison is not valid.

Number 8 clearly shows they just do not want any criticism of Islam. This is the main reason we must get this list to our local representatives. (Contact information will be provided below.)

Any of us that attend religious functions should print this plan up, and hand it out at our local houses of worship.

10. Sponsor reports on Islamophobia. Unless more documentation and yearly opinion surveys are conducted, people will continue to dismiss Islamophobia as a reality. So far, the UK is the only country which has officially commissioned a report on Islamophobia. The word has yet to become a part of American media.

11. Report any and every incident of Islamophobia you, your family or friends encounter. The FBI collects hate crime statistics. Report Islamophobia to them at your local FBI office. File a report with the Council on American-Islamic Relations at http://www.cair-net.org/ireport/. They issue an annual report on Muslim civil rights in the US. Also report the crime to your local police office.

Can it get any clearer than the above statement? When it comes to Islam, they want to make free speech a hate crime.

We must make sure our local politicians know that Muslims are out to end our freedom of speech, in regards to Islam.

13. For every incident of Islamophobia, write a letter to the editor and your local civil rights organization about it.

We need to take the time to write letters to editors of online papers, that use the term “Islamophobia” in their support of Islam. They probably have no idea how far Muslims want to take this.

14. Organize a program at your local mosque or community center about the problem of Islamophobia today. Hold a brainstorming session as part of the program as well to discuss how to solve this problem.

15. Thank those who speak out or act against Islamophobia. For instance, we should thank the US State Department for condemning the publishing of the offensive cartoons in Denmark.

16. Make Dua that Allah guides those who hold Islamophobic views and practice Islamophobia. The Prophet made Dua for the Quraysh, asking for them to be guided because they were ignorant of what they were doing by committing Islamophobic acts and saying wrong things against Islam and the Prophet.

I appreciate you guys taking the time to read my site, but please do more on this post and send a link to this post to your representatives. Just add a quick explanation about how Muslims are attempting to silence all critics of Islam.

The contact information for our local representatives, can be found HERE.

Here is the contact information for some major media outlets.

I figured that I would add some history, on the origin of the word “Islamophobia”.

Islamophobia: The word was created to silence all critics of Islam and the actions that occur under Islam. The word is a contraction to the meaning of the word phobia, as non-Muslims have every right to fear an Islamic takeover.

123 comments for “Muslim’s 16 Point Plan on Trying to Silence us by Using the Term “Islamophobia”~ Action Needed!”