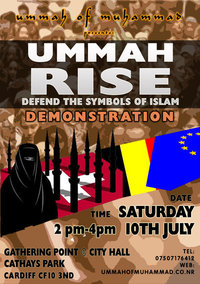 Whether it is conferences in America, Italy, Scandinavia, the UK, or on Facebook or YouTube, Muslims are uniting in their non-stop effort to takeover the West. The question is, will non-Muslims unite in time to stop them? Or will we continue to argue amongst ourselves, as to whether there is even a threat of Islam or not? I urge everyone to ask themselves if they want their families future generations, to be forced to live under Islamic rule? Because that is what is coming, if we lose this war.

Description.In the recent times we have seen an increase on the attacks on the symbols of Islam from the minarets to the niqab, from the beard to the honor of the beloved messenger (saw).

Remember ya ummah of Muhammad silence is consent so speak out against the evil.

Ya Ummahta Muhammad LET YOUR VOICE BE HEARD. AND FORBID THE EVIL

← Muslims to put Mohammad on the Moon
General David Petraeus: No Change on Rules of Engagement →

24 comments for “UK: Demonstration to Defend the Symbols of Islam”