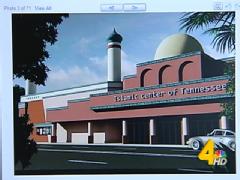 Here we go again, and no this is not the 52,000 sq ft Islamic Center, that non-Muslims are fighting against in Tennessee . That one is in Murfreesboro, this one is in Antioch. Non-Muslims are are waking up to the threat, and need to keep up the pressure. Meanwhile our government is supposed to protect us, but they are actually helping the enemy. The great citizens of America, are doing the job our useless government is supposed to be doing. Keep up the great work guys!

But a group of local Islamic leaders beat out the college for the contract on the building. The group plans to open the Islamic Center of Tennessee, which will include a mosque, eight classrooms, a library and lecture hall.

“I think the mosque will be a great addition to Antioch,” said Asif Chaudery, an area business owner.

Chaudery, who is Muslim, said the new center will do much for Hickory Hollow Mall and nearby stores.

“On Friday prayers and Sunday schools when you have 3,000 to 4,000 people here, that’s a lot of spending dollars they’ll be spending around this place,” Chaudery said.

But some feel the opposite way. Metro School Board member and Antioch resident Karen Johnson is among a group of neighbors petitioning Carmike Cinemas, asking its leaders not to finalize the contract for the Islamic Center.

“We’re meeting with the board of directors of Carmike to make a plea to them to please reconsider another offer from Nashville State,” she said.

Johnson said neighbors have nothing against the Islamic Center itself but don’t think it’s a good fit for the area. She said many neighbors feel Muslims tend to only patronize Muslim-owned businesses.

Chaudery said many in the Muslim community are professors and doctors with more spending power than college students.

The president of Islamic Center of Tennessee said he had no idea when they were bidding that Nashville State was even trying to buy the property. The Islamic Center hopes to finalize its contract with the owners of the building next month.