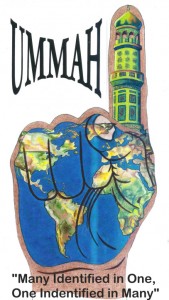 Right under our noses Muslims are uniting against us, and they are not hiding their goal of world domination. Unfortunately most non-Muslims only understand a traditional war, like WWII. They do not understand how Muslims are waging a lawful, non-violent war across the West, in which they use our freedoms against us to slowly takeover. It is our job to pick up the pace, and continue to educate more non-Muslims to the grave threat of Islam. We have to explain how Islam uses democracy to destroy democracy. Here is the information on the upcoming Khilafah Conference taking place on July 11th, 2010, at the Chicago Marriott Oak Brook. They are openly plotting against us at this meeting, and the Marriott needs to hear our voice. Their contact information can be found HERE.

Hizb ut-Tahrir is working night and day across the Muslim world for the re-establishment of the Islamic Khilafah. Our work has steadily grown over more than 50 years such that our presence is increasingly felt in Palestine, Pakistan, Afghanistan, Bangladesh, Indonesia, Central Asia and the Arab Muslim countries.

This Rajab Hizb ut-Tahrir is holding a landmark international conference in Beirut, Lebanon. This conference will bring Muslims from all over the world, including politicians, journalists, thinkers, academics and other influential people to call for the historic return of the Islamic Khilafah State. This conference will aim to raise the issue of establishing the Khilafah State to the top of the agenda in the Muslim world.

We urge you, brothers and sisters, to make a pledge to join this global effort this Rajab to re-establish the Deen of Allah Subhanu wa Ta’ala, the Khilafah, so that the long awaited Islamic leadership for this Ummah returns. A leadership that will have the backbone to stand up against the atrocities committed by Israel and other Western powers, a leadership that will end the corruption, looting and incompetence of our rulers and a leadership that will stand for Islam, conveying the Dawah of Islam to the peoples of the world.

Re-establishing the Khilafah is not an issue amongst issues. It is THE most important issue for the Muslim Ummah. Every day our blood is spilt cheaply in Palestine, Afghanistan, Pakistan, Kashmir and Iraq. The Muslim Ummah is crying out for a leader who will take a stand against these brutal occupations and stand up to the oppressors. To re-establish the Khilafah we need to build an overwhelmingly strong movement within our countries that will overthrow the corrupt rulers from their thrones and bring into place a Khalifah who will implement the Shariah and stand up for the affairs of the Muslim Ummah. Join us in building this global movement.