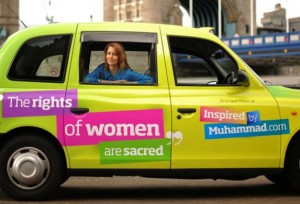 (Picture by Getty Images)
In an effort to con the public, that Islam is peaceful and fair, the Exploring Islam Foundation, has started the Inspired by Mohammad ad campaign. The ads will be placed on London bus stops and taxis. A spokesperson for the foundation, made the following statement.

Organiser the Exploring Islam Foundation said the campaign aims to highlight the Prophet Mohamed’s teachings to Muslims on the importance of the environment, gender equality and social justice.

Here are three of the talking points, they will be using.

“I believe in social justice. So did Muhammad.”

“I believe in women’s rights. So did Muhammad.”

“I believe in protecting the environment. So did Muhammad.”

Lets take them apart one by one.

“I believe in social justice. So did Muhammad.”

The “social justice” that Mohammad believed in was, that non-Muslims had less rights under Islamic rule. They had to pay extortion in order to live, as second-class citizens.

Another form of Mohammad’s “social justice” is shown in this Koran verse.

005.033
YUSUFALI: The punishment of those who wage war against Allah and His Messenger, and strive with might and main for mischief through the land is: execution, or crucifixion, or the cutting off of hands and feet from opposite sides, or exile from the land: that is their disgrace in this world, and a heavy punishment is theirs in the Hereafter;

The problem with this verse is that “mischief”, can be just about anything that a Muslims says it is.

“I believe in women’s rights. So did Muhammad.”

Court Testimony: The testimony of one man is equivalent to that of two women.

002.282
YUSUFALI:
Let his guardian dictate faithfully, and get two witnesses, out of your own men, and if there are not two men, then a man and two women, such as ye choose, for witnesses, so that if one of them errs, the other can remind her.

Here is a verse from a Bukhari Hadith, that backs up the Koran verse above.

Once again we see that under Islam, women have less rights than men. Why are men allowed up to four wives, but a women can only have one husband?

In the following verse Mohammad clearly states that men are above women.

002.228
YUSUFALI: Divorced women shall wait concerning themselves for three monthly periods. Nor is it lawful for them to hide what Allah Hath created in their wombs, if they have faith in Allah and the Last Day. And their husbands have the better right to take them back in that period, if they wish for reconciliation. And women shall have rights similar to the rights against them, according to what is equitable; but men have a degree (of advantage) over them. And Allah is Exalted in Power, Wise.

“I believe in protecting the environment. So did Muhammad.”

Except during jihad, of course. Which is pretty much constantly.

From the Reliance of the Traveller, A Classic Manual of Islamic Sacred Law

o9.15 It is permissible in jihad to cut down the enemy’s trees and destroy their dwellings.

Book 019, Number 4325:
It is narrated on the authority of Ibn Umar that the Messenger of Allah (may peace be upon him) caused the date-palms of Banu Nadir to be cut down and burnt. It is in this connection that Hassan (the poet) said:

It was easy for the nobles of Quraish to barn Buwaira whose sparks were flying in all directions.

in the same connection was revealed the Qur’anic verse:” Whatever trees you have cut down or left standing on their trunks.”

In conclusion we see that Muslims, are not being honest with us again.

A spokesman for Quilliam, the counter-extremism think tank said, “This initiative also helps British Muslims reclaim the Prophet Mohamed as a time-honoured guide for peace, compassion and social justice from those who seek to twist his teachings.”

Excuse me, but what I posted is directly from the Islamic scriptures. Your attempted smokescreen, has failed.

← Israel Tries to Deliver Flotilla Aid to Gaza and it is Refused~ Video
Oklahoma set to ban Sharia, Muslims not Happy →