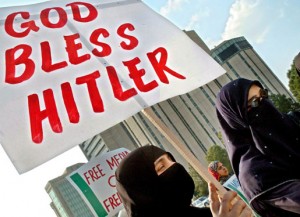 In this video we see another hate filled American Muslim. First she tries to play the victim card, but then she cannot hide her true feeling towards Jews. If it were up to me, she would be arrested for supporting an Islamic terrorist group. I have a feeling that Islamophile Eric Holder, would probably disagree with me though.

For the record, the hatred that Muslims have for Jews, stems from Islam itself.

25 comments for “American Muslim Woman Calls for the Genocide of Jews!~ Video”