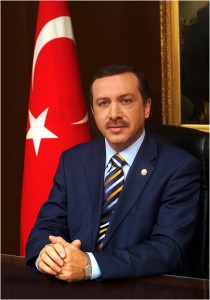 A few weeks ago in a show of power the Islamist government of Turkey took on their own military. Today we see them being good Muslims, and turning on what was supposed to be an ally. All the while, Iran moves towards obtaining nuclear warheads. Sides are being drawn up…

The Turkish premier says the international community should take action to disarm Israel as part of the efforts to make the Middle East a nuclear weapons-free zone.

Speaking to reporters on Sunday before leaving for the nuclear security summit in Washington, Turkish Prime Minister Recep Tayyip Erdogan said the international community has turned a blind eye to Israel’s nuclear program.

Pointing out that Israel is believed to be the sole possessor of nuclear weapons in the Middle East and is not a signatory to the Nuclear Non-Proliferation Treaty (NPT), Erdogan said, “Until now, we haven’t seen any request or intent from the international community with regards to Israel’s (armament). We are going to ask the international community: why haven’t you addressed this issue?”

The Turkish premier announced that he would raise the issue at the Washington summit and call on all 47 countries attending the forum to pressure Tel Aviv to relinquish its nuclear arsenal.

Erdogan said Iran’s nuclear program has come under scrutiny as a result of its membership in the International Atomic Energy Agency whereas Israel, which has not signed the NPT, is “free to do what it wants.”

Israeli Prime Minister Benjamin Netanyahu decided to cancel plans to attend the Washington summit after learning that Cairo and Ankara would demand that Tel Aviv sign the NPT at the meeting.

11 comments for “Turkey: Israel Must Give up Their Nukes”