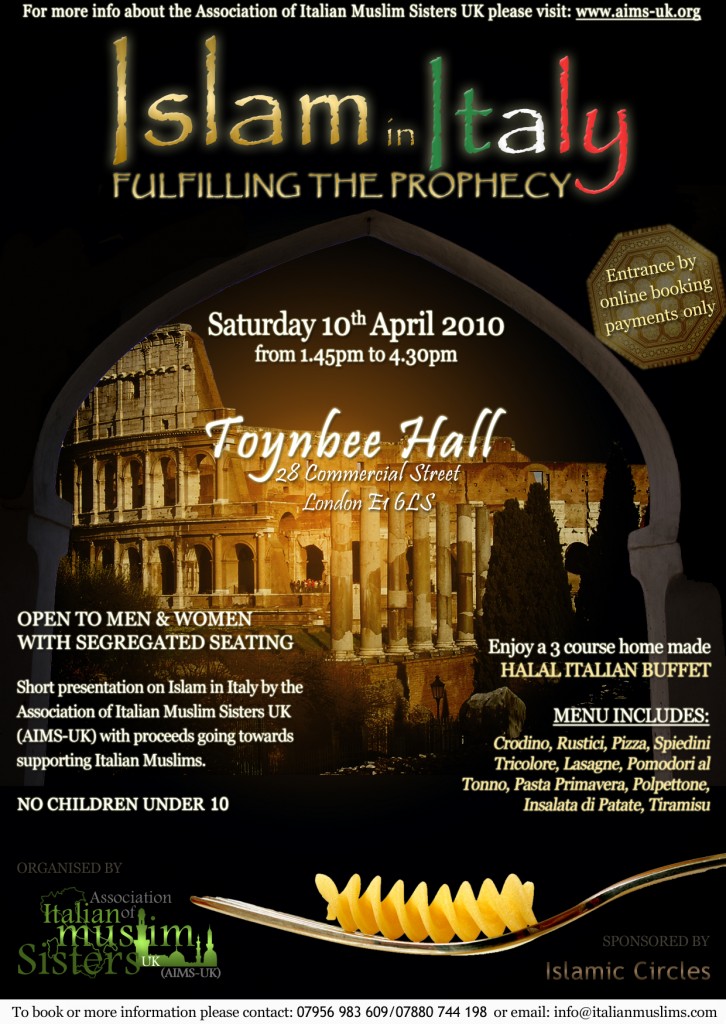 I don’t know about you guys, but I consider all pro-Sharia Muslims the enemy. If it were up to me, they would not be allowed to assemble like this. Allowing them to assemble, plot, and recruit within our countries is equivalent to having a life-threatening disease, and doing nothing to prevent dying a slow death. Because that is what Islam is doing to life as we know it. It is slowly destroying Western Civilization.

ISLAM IN ITALY – FULFILLING THE PROPHECY

“Are they waiting for anything except the Hour to come to them
suddenly? But its Signs have already come!” (Al-Quran, 47:18)

As one of these signs, Imam Ahmad reports in his Musnad that
Abdullah bin Amr bin Al-‘As (ra) mentioned: “Whilst we were
around the Prophet (saw) writing he was asked, ‘Which of the
two cities will be opened first, Constantinople or Rome?’ He
(the Prophet Muhammad) answered, ‘The city of Heraclius will
be opened first!'”

The Great Ottoman, Sultan Muhammad Fatih (rh) fulfilled the
first part of this prophecy by conquering Constantinople.
Thus, remains the second part. Having been forced out of
Andalusia, and more recently, dispersed across the Balkan
states, the city of Gaius Julius Caesar (Rome) remains. So
let the da’wah begin …

There will be a short presentation on Islam in Italy by the
Association of Italian Muslim Sisters with proceeds going
towards supporting Italian Muslims. Also, enjoy a 3-course
home made Halal Italian buffet. The menu includes: Crodino,
Rustici, Pizza, Spiedini Tricolore, Pomodori al Tonno, Pasta
Primavera, Lasagne, Polpettone, Insalata di Patate, Tiramisu.
Entrance is by online booking and payment only. Tickets are
£20 for adults and £10 for children, but kindly no children
under the age of 10 years.

11 comments for “Islam in Italy Conference=Plotting to Takeover Italy”