Since the Obama/Gates tandem recognizes the Taliban in Afghanistan, and lets terrorists into our country, this news just might not bother them. 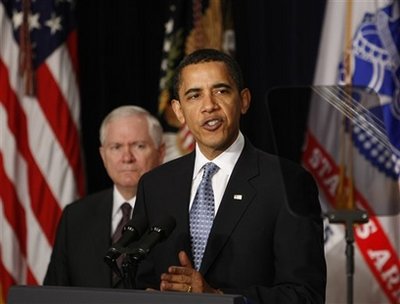 ISLAMABAD – Angry with the Obama administration’s position on arch-rival India, Pakistan’s Army has rejected a US request to launch a new offensive against Taliban in the northern tribal belt.

“Our resources and situation on ground do not allow us to open a new battlefront against militants in North Waziristan or any other area,” Major General Ather Abbas, director general of inter services public relations (ISPR), told IslamOnline.net.

“I will not comment on that,” Major General Abbas said.

“But certainly this has been frequently reported in the media, and their (US) desire in this regard is very obvious. One does not has to do much to understand this.

“We do not want to attain something which we cannot retain.”

The spokesman said that the Army has no plans to open a new front against militants for at least one year.“Launching an offensive and capture some area is one thing, but to maintain that is totally different,” he said.

The Pakistani Army launched in October a deadly offensive in South Waziristan to uproot militants of the Tehrik-e-Taliban Pakistan (TTP), an umbrella group of various local groups in the region.

The Army is also engaged in fighting with Taliban militants in Orakzai, Bajur, Mohmind, and Swat.

“We have captured South Waziristan, but it is not end of the game,” General Abbas said.

“Now we are facing the challenges of return of affectees, their rehabilitation and rebuilding the area, which need huge resources and commitment.

“It will take between six months and a year to consolidate our achievements in areas taken back from militants. Only after that, we will be in a position to think about a new offensive.

“If we launch a new offensive, that will totally be in line with our national interest, rather than any other country’s interest.”

2 comments for “Pakistan to Obama: No New Military Operations Vs. Taliban for one Year”