Not only are Christians in Egypt being physically attacked and killed, now even the soccer team is discriminating against them. Lets please face the reality of the situation here. Things are getting stricter across the Islamic world, and “moderate” Islam is not coming to the rescue. It will be their way of life or ours. Take a side. 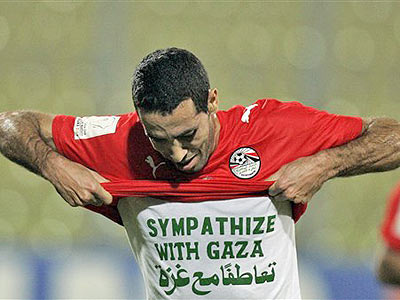 Shehata’s comments, published Thursday in Egyptian newspapers, show how sports and religion are increasingly mixing in the overwhelmingly Muslim nation of 80 million.

The intrusion of religion into sports is part of the country’s gradual movement toward religious conservatism over the last few decades, with more people praying at mosques, most women adopting the Islamic veil in public, and diminishing tolerance for secular Muslims or minority Christians.

There are no Christians on the squad defending its African Cup of Nations title in Angola.

For years, Egyptian athletes have demonstrated their piety in front of fans and the media – kneeling down to offer a prayer of thanks after scoring or winning, or praying before games to implore God to come to their team’s aid.

Shehata’s comments take religion in sports to a whole new level. He was quoted by Cairo newspapers as saying skill alone won’t guarantee anyone a place on the national team.

He said “pious behaviour” was the main reason for selection.

“Without it, we will never select any player regardless of his potential,” he said. “I always strive to make sure that those who wear the Egypt jersey are on good terms with God.”

One newspaper, the independent al-Shorouk, quoted Shehata as saying that striker Ahmed “Mido,” on loan from England’s Middlesborough to Cairo’s Zamalek, was cut four days after his initial selection because he did not fit the manager’s prerequisite for piety.

Mido, who enjoys a reputation for hard partying, said he was insulted by his exclusion.

Shehata, a former Egypt international best remembered for his midfield creativity, has not made a secret of the role religion plays in what he does. He is often seen by millions of fans and TV viewers praying during games, and asks supporters to pray for the national side.

In Thursday’s comments, Shehata boasted of how he convinced Egypt striker Mohammed Zidan, who plays for the German club Dortmund, to begin praying.

“I did not like how he used to be aloof and not mix with the rest,” Shehata said. “I convinced him of the need to pray and how important it is. He has been praying since.”

← Lying Imam: US Constitution and the Koran the Same
NYC: Muslim Wants no Jews on Jury →