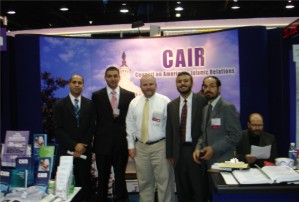 Back in mid-December the Council on America Relations (CAIR), admitted that hate crimes against Muslims were on the decline. Apparently they have forgotten that they made this statement, and have now said that the hate crimes are on the rise. They have flip flopped in their effort to shoot down our new airport security measures. Anything to destroy America.

‘Profiling’ of Muslims in US slammed

The increasing number of crimes caused by anti-Islam hatred has become alarming in the US, the Council on American Islamic Relations warned.

In a letter to US President Barack Obama, CAIR’s national executive director, Nihad Awad, complained about the situation.

Washington-based CAIR officials claim that new airport security guidelines, under which anyone traveling from or through 14 Muslim-majority nations will be required to go through enhanced screening techniques before boarding flights, will disproportionately target American Muslims who have family or spiritual ties to the Islamic world and are therefore subject to religious and ethnic profiling.

In a statement, the CAIR leadership claimed that the Transport Security Administration’s security directives would result in the profiling of Muslims.

“Under these new guidelines, almost every American Muslim who travels to see family or friends or goes on pilgrimage to Mecca will automatically be singled out for special security checks–that’s profiling,” said Awad.

While singling out travelers based on religion and national origin may make some people feel safer, it only serves to alienate and stigmatize Muslims and does nothing to improve airline security, he said.

“We all support effective security measures that will protect the traveling public from an attack such as that attempted on Christmas Day,” added Awad. “But knee-jerk policies will not address this serious challenge to public safety.”